The award-winning Modkat Litter Box is an all-in-one solution that helps eliminate litter tracking. This top-entry model is a beauty that won't scream “litter box” in your home. In fact, your guests may be wondering what the shiny white cube in the corner is for.

The Modkat lid swivels open for easy scooping. Any stray litter left on the lid falls back inside, and the lid lifts straight off, providing full access for thorough cleaning. The lid doubles as a walk-off mat, keeping your floors virtually pebble free!

All Modkat litter boxes work with our perfect-fit reusable liners. Modkat has a unique liner with a built-in tension band that keeps it securely in place. Our liners are constructed from durable tarpaulin, so they are smooth, scratch resistant, easy to clean, and they last up to 3 months. Just wash, rinse, and repeat!

Want to learn more about Modkat? See our FAQs. All perfect as we wanted, only downside is that it doesn’t protect as well from smell as a completely closed box. But would buy it again, high quality, solid, and a comparatively small footprint - important for us as our appartment isn’t that big.
Our kitten (3.5 months) immediately adopted it!!

Super happy. Design is great and my kitten started using it from day 1. Recommended!!

One of our cats loves this and we do too because she's not kicking litter all over the place anymore!! Also, by some magical way, the room doesn't smell of litter anymore.

I bought two litter boxes to replace old half-broken ones we had for years. First of all, my cats took to the boxes immediately, and with some smart placement against a wall, they used the platform to jump in and out of the box, reducing litter transfer. Is there no litter transfer whatsoever? no. Is there far less? yes.

I will also say that for the black one, even with litter that reduces dust when poured and whatnot, be sure to wipe down the exterior. Because of the shiny finish, it tends to look dusty after you add litter. No problem, a paper towel does the trick well enough. I will also say that there's surprisingly less odor than we experienced with the hooded litter boxes we had originally.

Also, I love that the box the accessories came in was a hidden cat toy. This absolutely entertained my cats while we set up the boxes (and kept them out of what we were doing, which was helpful). What a great idea– it shows that you guys really know cat owners. <3

I recommend these litter boxes for sure!

This litter box is perfect! I was very sceptical because it’s a bit pricey and didn’t want to spend too much money on a litter box, but the size was perfect for what I was looking for, as I needed it to be spacious but also compact. I had a hooded litter tray before and the floor was always a mess and had to clean after my cat multiple times a day! With this there’s almost no tracking at all. It’s a very smart design as it comes with a reusable liner that’s easy to empty and I wash every couple of weeks. My cat got used to the top entrance in no time. I would totally recommend! 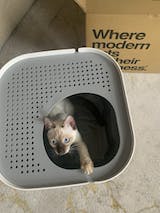